When I first saw the previews for BOUND I was wrought with excitement. A game themed with ballerina/contemporary dance? Geometric shapes and wonderful colors? Interesting character designs? Count me in!

Then I was in, and suddenly you could count me out.

While BOUND presents its self as a game with a unique play style, it really is more of an experience then it is a game. It doesn’t quite have any element of a game at all other than your ability to control the character, which is difficult in its self for multiple reasons. You’ll play as the very human female protagonist who switches from reality to a dream state. Her dream states are a representation of her psyche as she sorts out some inner turmoil about her past.

This very human female is also very pregnant and watching her slowly clamber up a short flight of stairs was PAINFUL, let alone having to watch her shuffle her feet as you try to walk down the beach. Our dream state dancer frolics and twirls as you walk around the levels, however it is quicker to just walk normally as the dancing becomes more of an annoyance. Don’t expect the camera to work with you either. It constantly flips in to odd angles without any warning, disorienting players continuously in the already winding levels. Often times the levels and platforms themselves would just drop me as I traversed. Death has no repercussions; if you fall to your demise you simply respawn from your last position and continue on your merry way. This only costs the player a few seconds as they wait for the dancer to stand again.

The levels themselves are very linear, but do have multiple paths for a player to take in some areas. This game claims to be a puzzle game, however no puzzles are present. I ran around and picked up all the colorful floating blocks that rewarded me with chirps, but never understood why I was picking them up. I skipped away as quickly as possible to get to the next tidbit of lack luster story. There are dangers to avoid, and to do so our dancer twirls her two ribbons around her to create a barrier, but she has no offensive attacks. To activate the shield you’ll need to hold down one button while mashing the dancing buttons, but it quickly becomes clear that it’s enough to just mash one button to get through the game. At times the audio was strange, music would stop or change abruptly, where music is often used as queues I found it to be more confusing. Music that was once building up as I sprinted across stairs would suddenly stop and I wondered if I was even headed in the right direction anymore. This moment of doubt would cause me to stop and look around, completely breaking what little immersion I had. The end of a level is defined by the dancer riding back through the level surfing on a golden ribbon. You can glide left and right and in different positions, or get yourself a drink and wait to be unceremoniously dumped at the door of the next memory.

I could not relate to the character nor did I feel invested in her. I could not even feel invested in the story as we saw snippets of memories and drawings from her journal. The storytelling tried to be vague, but I had already figured out what was going on by the second level. Because of this I found myself just rushing to the end. Once you complete the ‘story’ mode (if you can call it that), you’ll unlock the ability to do specific levels as speed runs if for some reason once wasn’t enough.

It is clear that they did their research on the game, if you spend your time just dancing and moving you’ll see the intimate details in the fluid animation. While she is a small and delicate looking girl, we see power and strength in her steps and twirls, making her appear very elegant. However the aesthetic of this game is its only saving grace.  Sorry to bear the news, but save your money on this title and watch someone else play it if you’re truly curious about the story. 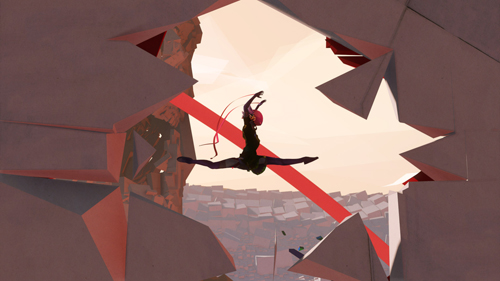