Abzu was recently released by Giant Squid who also brought us the soul searching story of Journey. Explore under water caves, arches and parallel universes?  Or just hang out with your fish pals and peacefully meditate to soft ambient orchestra and the stunning art in this game.

Dive head first in to Giant Squid’s pleasant and clever story telling. You won’t hear any narration, read cut scenes or character dialogue. Giant Squid uses the game’s music and its art to clue you in on what has been going on so far. This is a very rewarding form of storytelling, allowing players to interpret and piece together why it is that you’re exploring the ocean and trying to become bffs with a shark. A very beautiful shark. Did we mention how pretty this game is?

I’ve got a bit of an issue with depth perception and ABZU has no firm ground to stand out to help orientate me. It took a few minutes for me to adjust to the controls. I would still often get turned round or flipped up leaving me to float aimlessly while my brain tried to bash two rocks together and I could right myself. This felt more playful then frustrating, I could turn my wonky dive in to a silly swoopy decent. This game is fairly short with lots of areas to explore. So, no rushing trying to get to the end to see what happens. I found myself grabbing on to lots of fish and swimming around with them or tooting my helmet at other aquatic critters.

Now when I say explore, don’t get the impression that this is an open world sea adventure game. The game is very linear as its point is to deliver a story and be visually stunning. Those are things it definitely achieves. I finished this game in about two hours and that was with me trying to cover each nook and cranny I could.

Without giving away too much, the story is short and sweet. I may find myself playing though it a few more times to get some items I missed the first time or to read more in to story.  The story of Abzu didn’t quite sink in as much as Journey did. I felt a little less attached to the characters and would maybe have been more impacted by the story if it read a little clearer, but I do not regret playing it none the less. It is a beautiful game and an ABZU-lutely a wonderful experience. Okay, I’ll leave now, until next time! 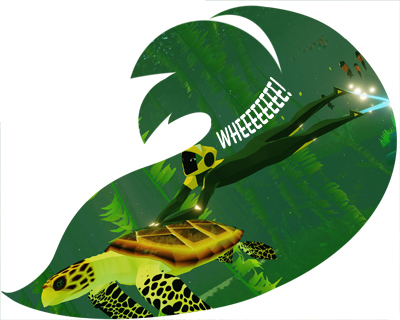 Surprise! #GetOut #moviescreening #gettingbackingthesaddle
Happy belated #NewYear #Geeks! Here's to a brand spanking new year filled with #GirlGeek goodness.
Head on over to www.girlgeekhq.com to see this week's #GirlGeekHQ #WCW! Can you tell which badass chick it could be from this picture clue?!?
Happy Tuesday #Geeks! #GirlGeekHQ loves #StrangerThings & #fanart and there are tons of awesome works floating around that are stunning. Head on over to www.girlgeekhq.com to see our favorite #Netflix #StrangerThingsFanArt !!! 🎨🎨🎨