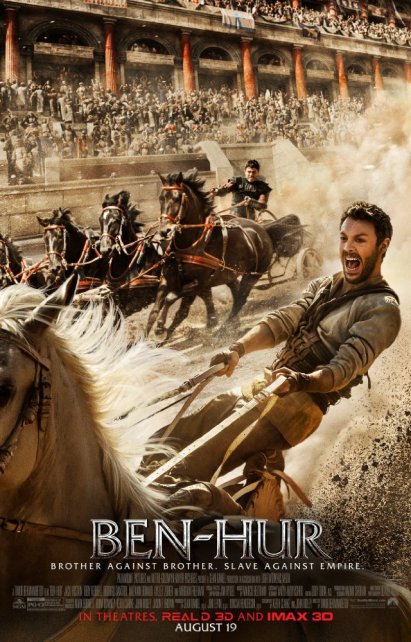 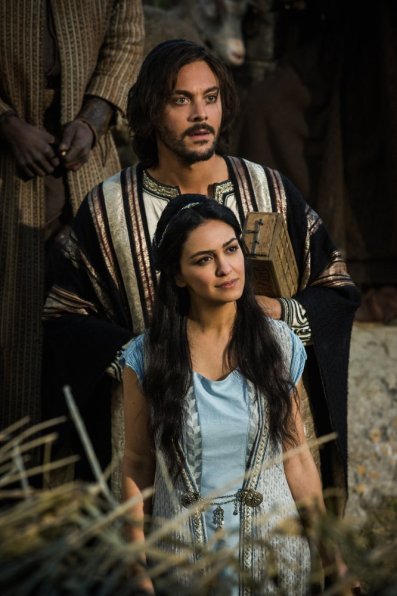 Judah Ben-Hur, a wealthy Jewish prince, and his adopted Roman brother, Messala Severus, start out as the best of friends and enjoy their playful competitive spirit. However, Messala feels the constant need to prove himself to the Ben-Hur family and make a name for himself that is not associated with his deceased grandfather’s prior mistakes. Messala flees to join the Roman Military, making his way through the ranks for years, while Judah remains a passive leader amongst his struggling people. Years later the two brothers come together again when the Roman Empire begins to occupy Ben-Hur’s homeland of Jerusalem and a group of radicals end up putting Judah and his family’s lives in danger. Falsely accused of treason Messala is forced to turn his back on his adoptive family and dooms Judah to a life as a galley-slave until his death. More time passes and Judah, fueled by hate, survives a fatal military attack and makes his way back to Jerusalem for his chance at redemption and revenge. 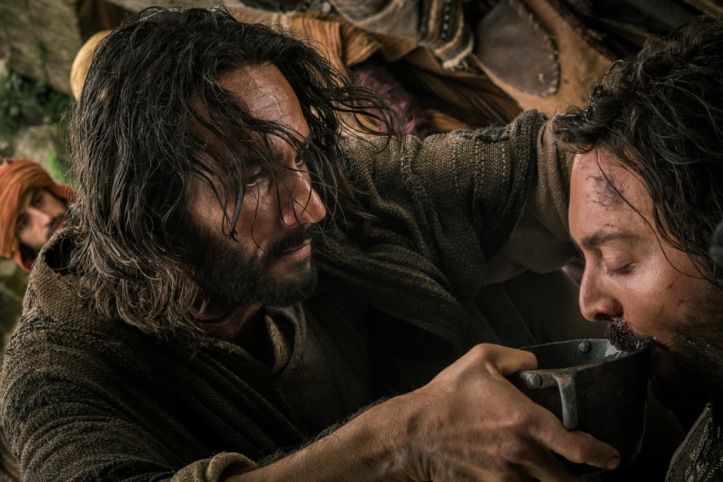 Being that Ben-Hur originally debuted in 1925 as a silent film that was adapted from an 1880 novel bearing the same name, and then was remade by Director – William Wyler in 1959, this 2016 is a far cry from the best known epic of the late 1950s. Wyler’s version was nearly four full hours and featured the largest names in Hollywood at the time. Fast forward nearly 60 years to Director – Timur Bekmambetov’s two hour version this film is utter nonsense if compared to its predecessor. 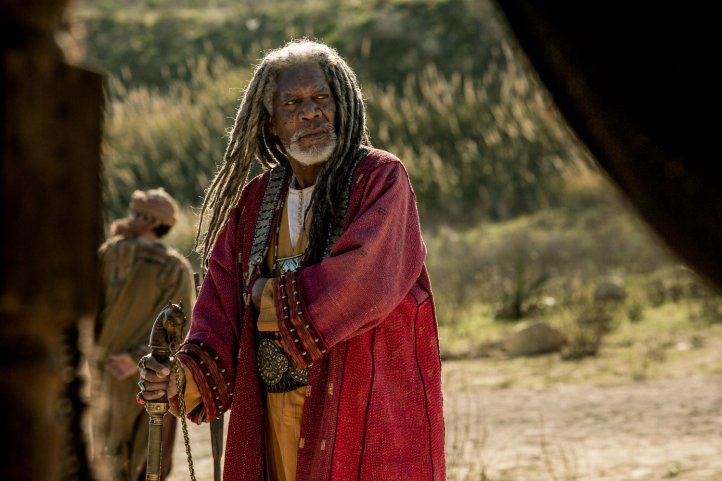 First off, the acting is subpar at best and lacks heart. We’ve seen Morgan Freeman play the same role a hundred times now and unfortunately is type-cast yet again as the wise old black man that has to guide a broken white man into success. Next the story line is beyond boring with predictable outcomes at each turn. But, yet it still remains sporadic and convoluted. There is a scene where Ben-Hur escapes his slavery and finds himself waking in a tent and suddenly knows all there is to know about healing sick horses so he can barter with a man that wants to return him to the Roman Army. How does he know about horses? It makes no sense other than a prior scene where he walks into a stable at his huge mansion. The audience is just supposed to understand and that he’s a horse whisperer and can be trained in a short montage to become an amazing chariot racer. 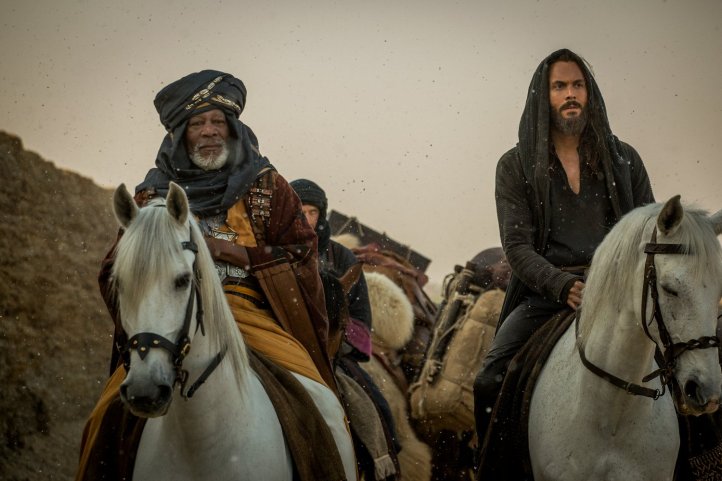 Secondly, the cinematography is sloppy and unnecessarily coming out in 2D, 3D, RealD 3D, Digital 3D and IMAX 3D. The effects add nothing to the film and the $100M budget for this film was significantly poorly spent on ridiculous extravagance that does not help in the slightest. The chariot race scene was by far the most interesting part of the movie. It lasted maybe 10 minutes and was filmed with bad angles, choppy cuts, and obvious digital CGI effects. As each racer died or was injured in gory detail I felt mostly bad for the fake horses instead of the racers. 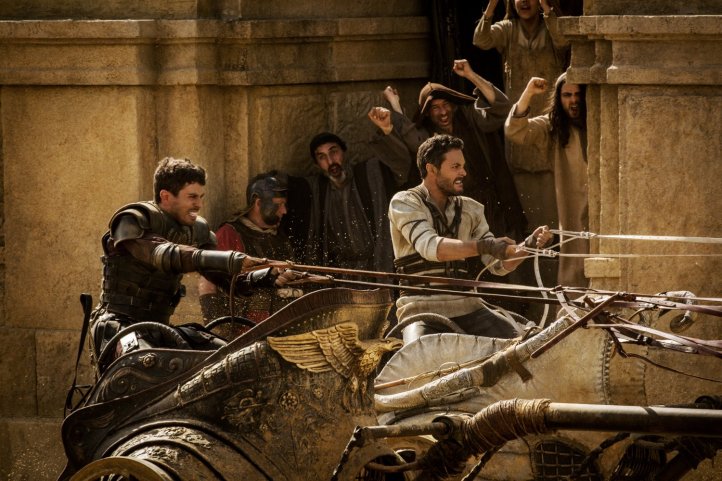 Besides the poor plotlines and abysmal cinematography, the movie itself was a good 15-20 minutes too long. After the major climax of the film finishes with *SPOILER* Judah winning the chariot race and “killing” his brother, the film continues to show a heavy handed death of Jesus Christ. There were subtle clues sprinkled in the beginning of the film that Jesus was around but then at the end Judah has a complete literal come-to-Jesus moment when he tries to save his life but obviously falls short. Plus, it’s not like he tries very hard, if anything he just witnesses what happens. But, still everything ends up roses for Judah as his family that he once thought was dead comes up alive and miraculously healed, his wife loves him again, he is a free man, him and his brother (whom isn’t dead after all) makeup, and bonus – he’s now a hotshot chariot racer.

Skip this film in theaters, don’t spend the extra price for 3D, RealD 3D, Digital 3D, or IMAX 3D. Wait until it comes out on DVD and rent if you absolutely have to watch it.

Ben-Hur is rated PG-13 for sequences of violence and disturbing images and has a 124-minute runtime.

Surprise! #GetOut #moviescreening #gettingbackingthesaddle
Happy belated #NewYear #Geeks! Here's to a brand spanking new year filled with #GirlGeek goodness.
Head on over to www.girlgeekhq.com to see this week's #GirlGeekHQ #WCW! Can you tell which badass chick it could be from this picture clue?!?
Happy Tuesday #Geeks! #GirlGeekHQ loves #StrangerThings & #fanart and there are tons of awesome works floating around that are stunning. Head on over to www.girlgeekhq.com to see our favorite #Netflix #StrangerThingsFanArt !!! 🎨🎨🎨